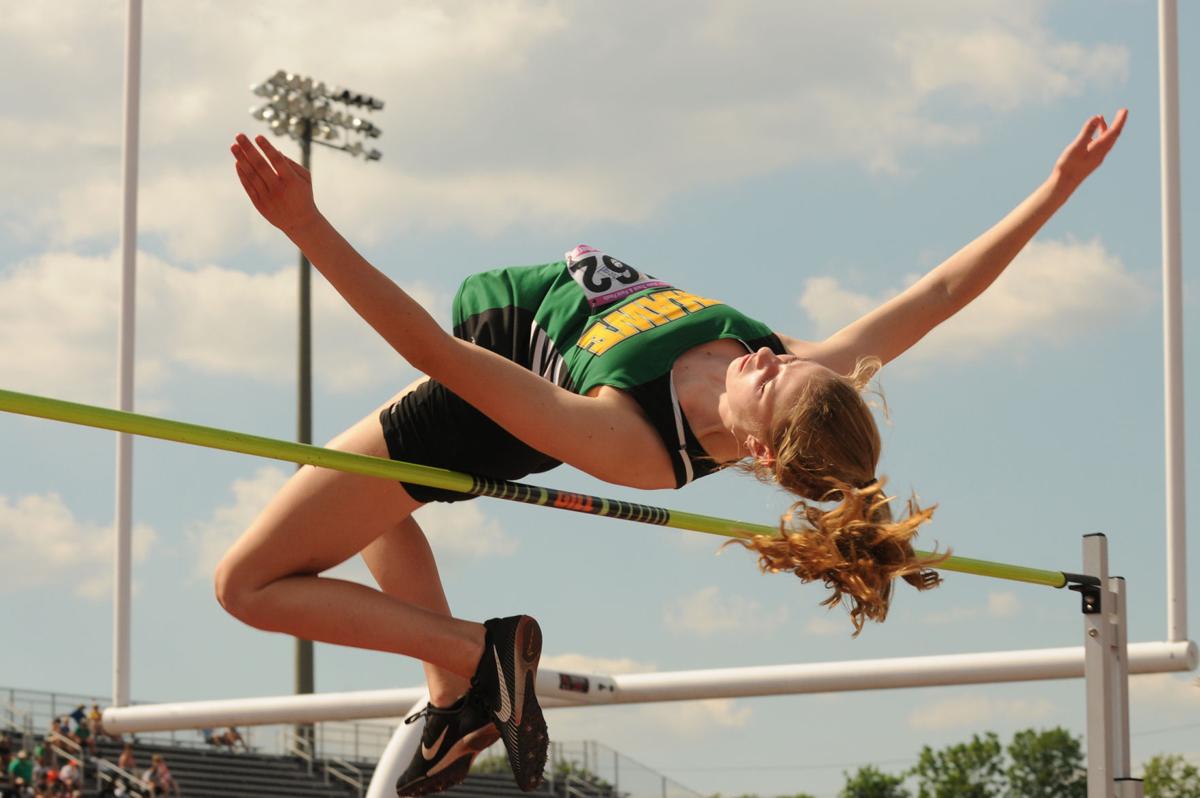 Shawe’s Emmalina Leatherman clears the bar during the high jump competition at the IHSA Girls Track & Field State Finals in Indianapolis on Saturday. 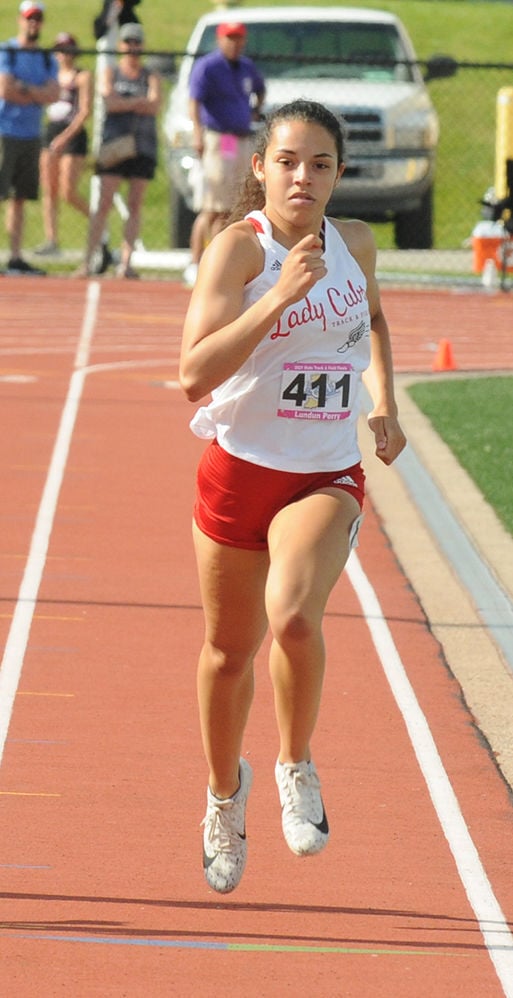 Madison’s Lundun Perry comes down the front stretch during the 200-meter dash at the IHSAA Girls Track & Field State Championships in Indianapolis on Saturday. 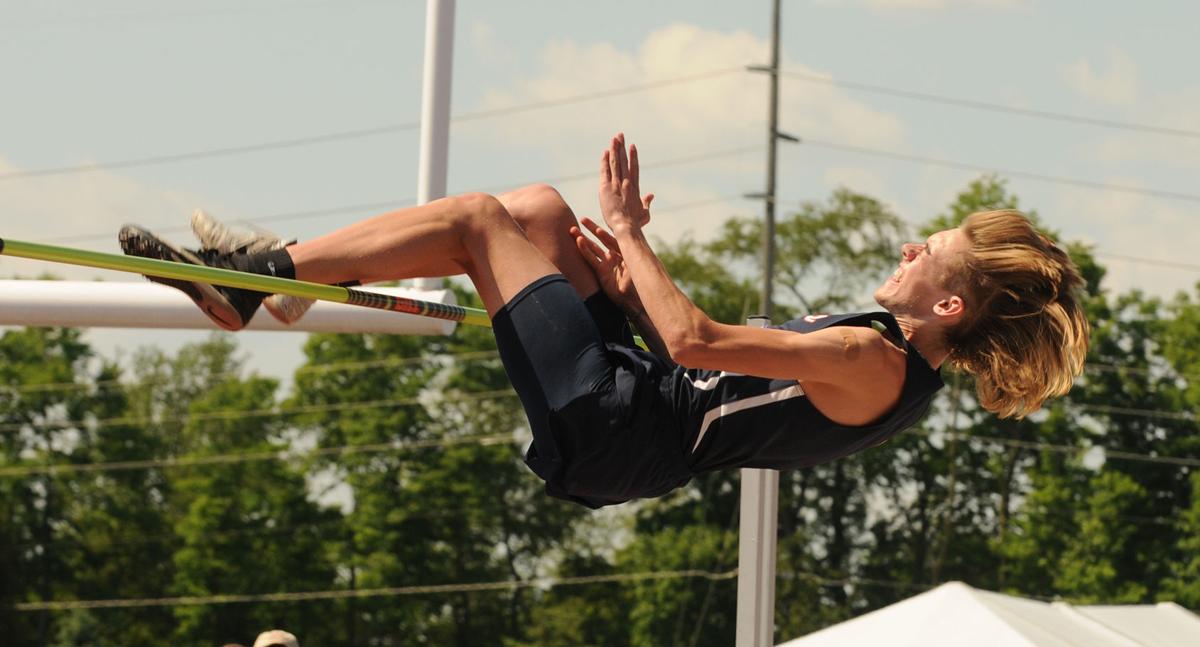 Southwestern’s Owen Bates strains to clear the bar during the high jump competition at the IHSAA Boys Track & Field State Championships in Indianapolis on Friday.

Shawe’s Emmalina Leatherman clears the bar during the high jump competition at the IHSA Girls Track & Field State Finals in Indianapolis on Saturday.

Madison’s Lundun Perry comes down the front stretch during the 200-meter dash at the IHSAA Girls Track & Field State Championships in Indianapolis on Saturday.

Southwestern’s Owen Bates strains to clear the bar during the high jump competition at the IHSAA Boys Track & Field State Championships in Indianapolis on Friday.

INDIANAPOLIS — Nervous in her first meet on the state’s biggest stage, Emmalina Leatherman jumped right into the bar on her first attempt at the high jump and her second attempt wasn’t much better. But rather than put her head down and give up, Leatherman refocused and cleared the bar on her third and final attempt.

From there, the Shawe sophomore was off and running, clearing her next three heights and setting a new personal record while placing 10th in the high jump at the IHSAA Girls Track & Field State Championships at Ben Davis High School in Indianapolis on Saturday.

Leatherman ended up clearing 5 feet, 5 inches to break her personal best by one inch and actually tied for sixth with five other jumpers. But due to attempts, she officially finished 10th, one spot out all-state honors.

“I was really nervous. My legs felt like they were ready to give out,” Leatherman said. “A talk with my coach helped boost me up.”

Leatherman was one of three local athletes competing in the state finals this past weekend, which were moved from Indiana University in Bloomington to Ben Davis High School due to the COVID-19 pandemic. Southwestern’s Owen Bates placed 15th in the boys high jump on Friday while Madison’s Lundun Perry ran 22nd in the girls 200-meter dash on Saturday.

Having already posted a career-high, whatever happened next was icing on the cake. She came close on her first attempt at 5-foot-6 but missed the next two to end her day.

Unlike Leatherman, Bates easily cleared his first attempt at 6-foot-even then needed only two attempts to clear 6-foot-2. The Southwestern senior then ran into trouble on his third height despite clearing 6-foot-4 on his first attempt and being all the way off the mat by the time the bar finally fell.

Under previous rules, Bates’ attempt would have counted since he was off the mat but new rules state that as long as the bar is moving, the jump is not official so once the bar tumble it was a scratch.

Bates admitted he was unaware of the new rule and was disappointed to learn of the scratch. He then missed his next two attempts to scratch out, tied with four other jumpers in 15th place.

“It’s on me for not knowing the rule,” Bates said. “Honestly, I was hopeful (on the next attempts) because I pretty much had it but it just wasn’t the case.”

The miss ended up costing Bates dearly. Had it counted — and on his first attempt — he would have finished no worse than eighth, good for all-state honors.

“A few years ago, that would have been a clear and he would have been moving on,” Southwestern coach Zac Nussbaum said. “I just want to say how proud I am of the kid. To see where he has come from as a freshman to the athlete he has turned into and the job my wife (jumping coach Stephanie Nussbaum) did; they work so well together. It’s been so neat to see him get to where he is.”

Bates was pleased with his performance despite the miss. He will now head to Bellarmine University in the fall as a preferred walk-on and he was happy to end his high school career at the highest level.

“All I can say is that I did my best,” Bates said. “I didn’t perform the way that I wanted to, but at the end of the day, it was a really good season.”

Meanwhile, a bobble at the start — one that lasted less than a tenth of a second — was all that it took to keep Perry out of contention in the 200 meter dash.

The Madison senior didn’t get out of the block as well as she would have liked in her preliminary run in the 200 dash and finished seventh in the heat and 22nd overall at 26.78 — half a second slower than her time at regional.

“I was just stuck in my blocks and rather than pushing off like I normally do, I’m pretty sure I went back and then pushed off which lost me some time,” Perry said.

Perry was clearly disappointed with her run, but considering that she, and everybody else, missed last season due to the pandemic, she was pleased with her season as a whole.

“It is crazy and and insane. I never thought I would be able to come up here,” said Perry, who will run at the University of Indianapolis in the fall. “There are so many people and it’s getting me ready for college. It was great.”