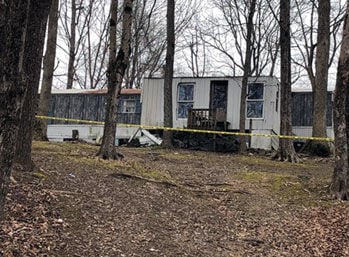 The body of Kristina “Krissy” Jones was discovered in this residence just north of Holton in Ripley County on Jan. 11. A man suspected of being responsible for Krissy’s death was arrested on March 26 in Jennings County. An initial hearing took place three days later. See Page A9 for more information. 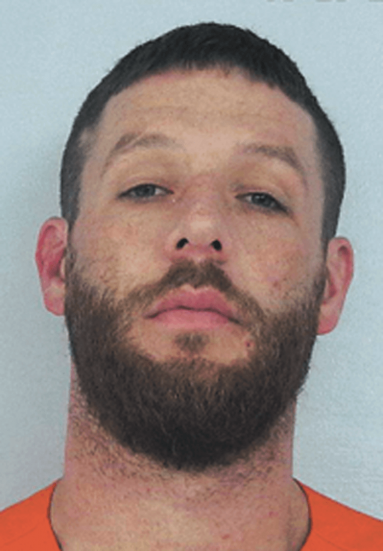 Deputies with the Jennings County Sheriff’s Office on Friday, March 26, arrested a suspect in the alleged murder of a Ripley County woman on Jan. 10.

Jordan Knudson, 36, of Holton, has been charged with murder, a Level 1 felony, in the shooting death of his former girlfriend, Kristina “Krissy” Jones, 36, at the home of Rodney McEvoy on County Road 700 West near Holton. Knudson’s initial court appearance was Monday, March 29, in Versailles, where a plea of not guilty was entered with bond set at $2 million cash.

The arrest was made just three days after a warrant was signed by Ripley County Circuit Court Judge Ryan King. Knudson was apprehended by Jennings County deputies when he showed up in Vernon for a court hearing in an unrelated auto theft case.

The warrant was issued after a two month investigation by detectives at the Indiana State Police Versailles Post. Detective Brian Earls was assigned to investigate after Jones’ body was found bloodied and unresponsive in a bathtub at the McEvoy home on the night of Jan. 10.

According to information obtained from court records, McEvoy came home around midnight on Jan. 10 and found Jones lying in the bathtub face up. He ran from his house to his parents’ home less than 100 yards away to get help. McEvoy’s mother, a nurse, entered the home and, seeing Jones, thought she had been severely beaten. She called 911 and began life saving efforts until first responders arrived but Jones was pronounced dead at the scene.

“I was just hoping I could breathe some life into her, but it couldn’t be done,” Marilee McEvoy told the Osgood Journal. “Nobody deserves this.”

According to a court affidavit, Jones was so afraid of Knudson that she had filed for a Protective Order against him in Ripley County on Dec. 15, 2020. Court records indicate that Jones had sought treatment at Ascension St. Vincent Jennings hospital in North Vernon on Dec. 15, 2020, complaining of pain to the left side of her head. She allegedly told medical personnel that “he (Knudson) hits me in the head ’cause it doesn’t bruise as bad.”

The Protective Order was granted that day but Knudson was not in the courtroom and court records show that he was never formally served notice of the order.

However, Knudson allegedly told investigators that he was aware of the Protective Order at or near the time Jones filed the papers.

Jones’ friends said she frequently reported being physically abused with multiple episodes of being knocked out by Knudson. She had reported severe head pain and an inability to focus and was diagnosed with a likely concussion before being released from the hospital. They said she had also suffered a severe arm wound that they thought needed attention, but they couldn’t get her to seek help.

During their investigation, detectives talked with Knudson and he told them that he and Jones had spent time together at the home of his parents the weekend before she died.

Angie Miles, an employee of the Holton Food Mart, told police she got a call from Jones on the weekend that she died and that Jones said she was afraid and hiding from Knudson in Miles’ vehicle with the doors locked. A customer at the store overheard the conversation and volunteered to take Jones wherever she needed to go and she gave the McEvoy address and was dropped off there at about 8:25 p.m.

The court affidavit said police interviewed a friend of Jones who said she was with her at the McEvoy residence until about 9:30 p.m. on Jan. 10. At the time she left the residence, only Jones was there.

When questioned by detectives, Knudson said he used his parents’ cell phones to communicate with Jones by texts and calls in the evening hours of Jan. 10, but that he had deleted those communications from the phones. His parents told police that Knudson did that regularly.

Knudson said he drove to the acquaintance’s garage where the two spoke before Jones and Rodney McEvoy showed up. Knudson told police that all four of them then allegedly used illegal drugs and that he left after being there for approximately 30 minutes.

An autopsy performed by Hamilton County, Ohio, forensic pathologist Gretel Stephens, determined that the cause of Jones’ death was multiple gunshot wounds to the head and noted that the wounds were made by a .410 caliber shotgun.

The probable cause affidavit stated that Jordan Knudson’s parents, Norman and Pina Knudson, had purchased a Mossberg 500 .410 pump shotgun and three boxes of .410 shotgun shells at the Greensburg Walmart on July 14, 2020. It further noted that Norman and Pina Knudson last saw that weapon on Dec. 24, 2020, when Jordan Knudson placed the gun and some ammunition inside the home. Norman Knudson told police that he became aware that the .410 shotgun was missing from the residence on Jan. 11, 2021, along with a box of .410 shells.

After being arrested in Vernon, Knudson was returned to Versailles and lodged in the Ripley County Jail. His initial court appearance was on Monday, March 29, where a plea of not guilty was entered and Hertel asked for and received bond in the amount of $2 million cash. A jury trial is scheduled for Sept. 14 at the Ripley County Courthouse.