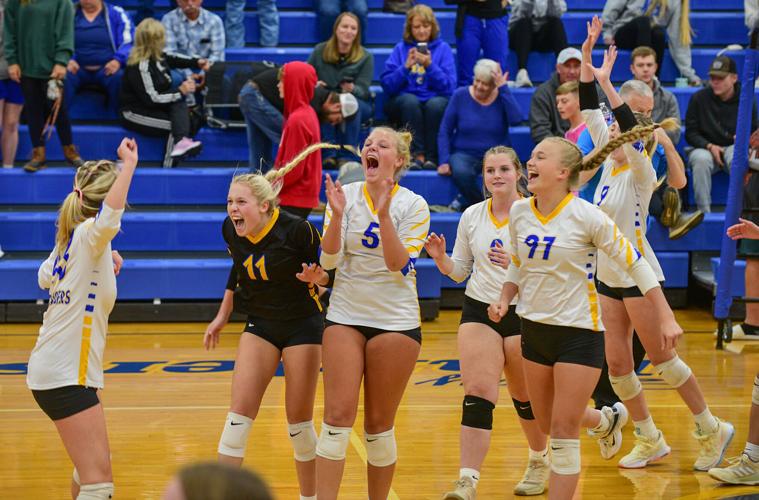 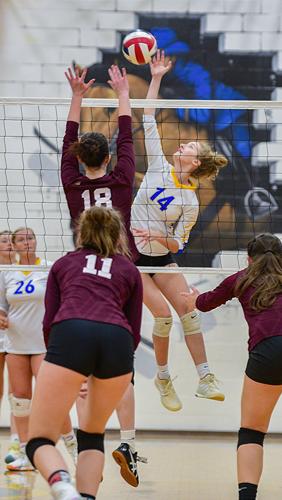 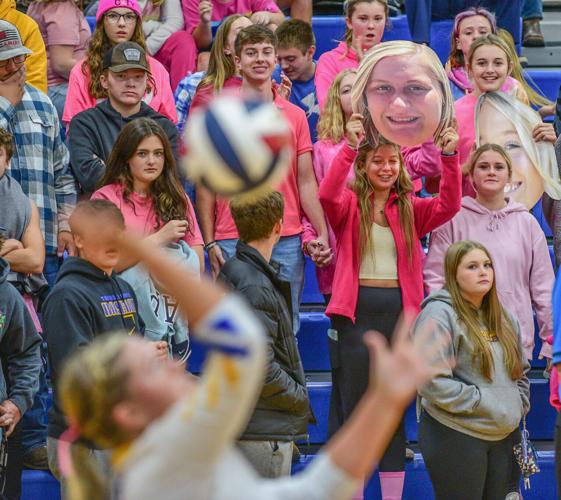 A fan in the Trimble County student sections holds up a picture of Emma Ginn as the senior serves the ball (foreground) during the 31st District Tournament semifinals at Trimble County on Tuesday, Oct. 18. Host Trimble won the match in three sets.

A fan in the Trimble County student sections holds up a picture of Emma Ginn as the senior serves the ball (foreground) during the 31st District Tournament semifinals at Trimble County on Tuesday, Oct. 18. Host Trimble won the match in three sets.

Trimble County made quick work of Owen County, blitzing past the Rebels in three sets in the semifinals of the 31st District Volleyball Tournament on Tuesday in Bedford.

"That is how they can play when they all come out ready to play," Trimble coach Shawna Jent said. "We're glad they decided to bring it come districts."

Trimble County (15-10) wasted little time in establishing leads in all three sets and only briefly experienced any kind of resistance.

Trimble's Gracie Jent opened the first set with five-straight scores to give the Raiders an early 5-0 lead, but Owen County rallied with a six-point serving run of its own behind Ellie Perkins to take a 7-5 lead.

But the Raiders got the side out on a serving error and promptly took control of the set. A service ace by Bailyn Clifford gave Trimble a 9-8 lead and the Raiders closed the set on a tear, outscoring the Rebels 17-3 the rest of the way to win 25-11.

The second set was even more lopsided. After a serving error on Owen's first attempt, Gracie Jent again served the Raiders to a big lead with seven-straight points en route to an 8-0 lead. Owen never recovered and the Raiders leaped ahead by scores of 14-4, 17-8 and 21-10 before finishing off the 25-13 win.

The third set was the closest of the match but even it was a blowout early. The Raiders jumped ahead 7-2 and led 17-9 before Owen mounted a rally. Trimble tightened a bit and the Rebels closed to within 19-16 before an Aubree Craig kill stopped the run and Clifford served the Raiders to a 21-17 lead. Owen got back to within four (22-18) but an Anna Benecke kill and two errors by the Rebels closed out the match 25-20.

For Trimble coach Jent, the key to the win was the Raiders' ability to cover the floor and keep Owen from staging any rallies.

"Our biggest focus in the offseason was our defense and we actually went more to camp just to focus on that defensive coverage. And they put it into play tonight," Jent said. "We covered our tips, which is normally something we struggle with. And we watched a lot of game film to know how they play and understand what we've got to cover. They executed it beautifully."

In the other semifinal, top seeded Eminence had little trouble with county rival Henry County, posting a 3-0 (25-18, 25-9, 25-17) victory. Eminence advances to the championship match with a 24-7 record including three wins over Trimble County this season — two of which were in straight sets.

Despite those losses, all three matches were close and Trimble picked up a set win in a 3-1 loss at home on Sept. 7. Coach Jent knows the challenge her team faces, but also believes they will be ready to play.

"I think that they've seen tonight what they're capable of. They know they're not done yet and I have five seniors that know that this is their last chance to get it done," Jent said. "I told them this morning that we have sparkling grape juice and cupcakes in the locker room and we're either going to celebrate a win or we're going to celebrate that we had a great season. It's for them to decide when it's over. They have that mentality of "we're going to decide when it's over" and they didn't want it to be over yet (tonight) so we're going to keep going."

The 31st District Tournament Championship game was played on Wednesday, after deadlines.

Owen Co. 3, Carroll Co. 0 (Monday) — Carroll County's season came to an end with a 3-0 loss to Owen County in the 31st District Tournament semifinals on Monday night in Bedford.

Carroll ends the season with a 1-18 record.